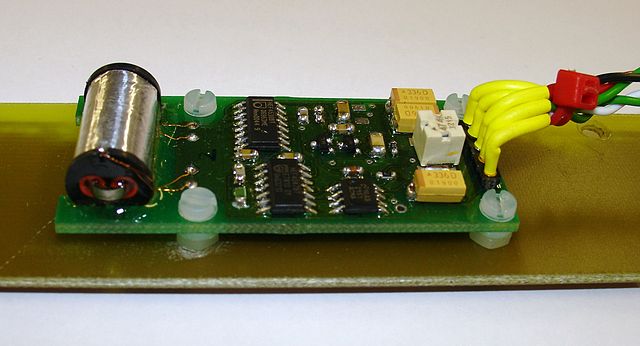 The fluxgate magnetometer—not to be confused with the flux capacitor—is a nifty tool for determining the strength and direction of a magnetic field.

It works by using an alternating current to induce an alternating magnetic field in a magnetically permeable core (ferrite core), saturating the core. The magnetic field then induces a current in a secondary winding. My apologies for not having an open-use schematic, but the ones here and here are quite good, plus have a more nuanced explanation.

Absent an external field, the induced current will be equal to the driving current. However, in a magnetic field, one direction will saturate more easily and the other less easily, because the permeable core will be reacting to the external field. As a result, the secondary windings will have a current imbalance when compared to the driving winding, and the imbalance will show up both on the rise and fall of the driving waveform. The imbalance has a frequency of twice the drive frequency. Also, this design detects magnetization in one direction only. For a full 3D characterization of the direction of the magnetic field, it takes three magnetometers, each perpendicular to the others.

One of the early applications of fluxgate magnetometers was the detection of submarines (large metallic bodies). Indeed, through this type of study, the alternating magnetization of rocks along the sea floor of the Atlantic Ocean was discovered, with bands parallel to the Mid-Atlantic Ridge. These data gave strong evidence in support of plate tectonics.

Perhaps an even more exciting application is the study of magnetic fields near the Moon. NASA’s ARTEMIS mission (using repurposed THEMIS spacecraft) is flying two magnetometers around the Moon. Heidi Fuqua, a scientist at UC Berkeley, and her collaborators are using the magnetic data gathered by the ARTEMIS satellites to study the Moon’s interior. Depending on the size and conductivity of the Moon’s interior, the magnetic field will have differing responses to the induced magnetic field from the solar wind. It’s pretty neat stuff!